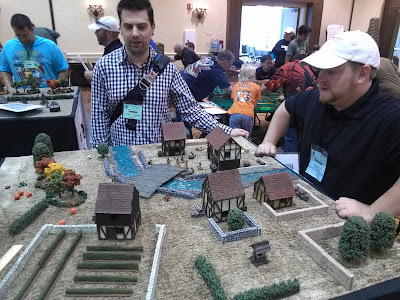 Over the Labor Day weekend Strategic Elite traveled to Pacificon Game Expo in Santa Clara California. I had my Cadre members with me, and we locked arms once again with The Launchpad Comics & Games to tag team our demo tables near to their sales booth.

[Above & Below: Alan Washburn & Kris Reedy demo on our Euro Village board] 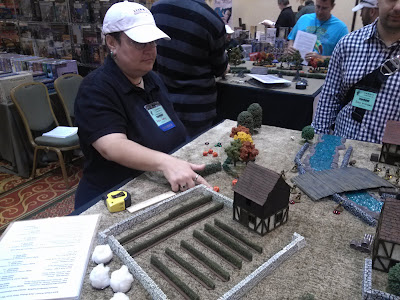 This was my first outing to a full blown 1200+ person gaming convention. Yes, I know, I've either been too poor as a young man, or too busy as an adult to attend bigger conventions. For me, this was a grand affair. I was also invited to attend the War College as a featured speaker.

The best part was that I was attending with so many of my friends. In addition to everyone listed above, Mike Zabkar from Mike's Games & Collectibles was there sporting his awesome Dust Tactics costume on Saturday (he won the contest), as well as Curtis & Sarah Lyon of Savage Mojo fame. 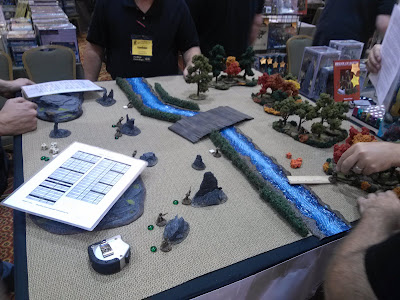 We arrived later in the evening on friday, got the tables set up and headed out to the Flea Market. I had high hopes that there would be gobs of great stuff, but alas, no, it was my only disappointment. The flea market is the one thing the Staff cannot control. If people don't have stuff to sell, then that's not the Con's fault. So with that we hit the hay and started Saturday fresh. 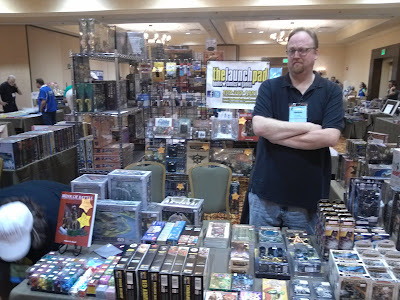 [Above: Jim Mason, one of the owners of The Launchpad and secret Space Pirate in his spare time.]
Saturday was a bit of a different experience. It seemed to us that the attendees were a bit less energetic than we had thought they would be. The Cadre ran demos all day, and some books were sold.
I spoke at the War College to an audience of two: Kurt & Paul. I had hoped for more, but since nobody knows who I am, or what my game is about, I was thrilled that I had two people willing to llisten!
We had a great time discussing Brink of Battle, and Kurt in particular was a one man whirlwind of excitement! That was a great feeling. Someone getting excited about my brain child is such a rewarding feeling.
We ended the day out on the patio smoking a batch of cigars I bought for the occasion. Then into the main game room for some furious games of Heroclix and Star Trek Tactics. 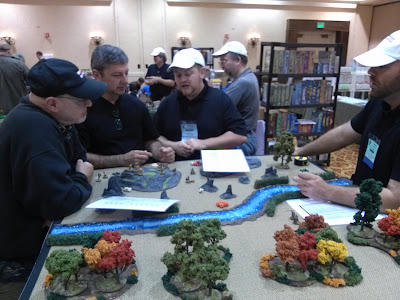 Sunday was fantastic! We had experienced the kind of energy from the attendees that we had expected to feel on Saturday. We think it had to do with the number of big gaming events in the wargaming room. Greg from the Miniature Wargaming Society of Sacramento had his Pirates of the Carob-bean Sea mega game in 15mm which is a visual feast!
We also liked the 47 Samurai table, of which I thought I snapped pics, but apparently didn't. It was pretty damn cool. I bought Arkham Horror board game from Mike & Jim, and after a loooong ass day myself, Alan, Drew, Mike Z, and Joe sat down to rummy our fatigued brains through it. And yes, we beat Cthulhu. We bad.
Monday brought more demos, and some lengthy and engaging conversations with new BoB owners/players. I am looking forward to seeing those conversations grow into a much larger Brink of Battle player base.
The Staff
Gabriel Vega and I became fast friends back in March at ConQuest Sacramento. He really cares about the history of this convention, and the people that are involved in its preparation and execution. I look forward to many more opportunities to strengthen our friendship and further the growth of both of these great conventions.
Aldo Ghiozzi took the time to coach me on stretching my distribution of BoB on Saturday. I want to thank him again for bringing me some valuable insights to a side of the industry that I'm not well versed in. Also, he did a great job managing the Dealer's room and making sure we had what we needed. I look forward to working with Aldo in the future.
I got to talk more with Mike Zbella, another great guy. He was Johnny on the Spot with the projector for my presentations. He was zipping around like the Flash making sure all needs were being met for the participants and vendors. Great job Mike.
I also had the pleasure of meeting John Wootress, and getting to know him. We have much in common, and he was even able to join us for a cigar. I don't offer that to just anybody! Great hanging out with you John.
I didn't get to meet Dave Partak, but will make a point of it at ConQuest.
Also, Jackie and Dawn were great to work with, and all in all, we had a great experience with all the staff.
Strategic Elite & The Launchpad also got to form a strategic alliance with Mike's Games & Collectibles, and Curtis & Sarah Lyon, and our friends in First Born Gaming. We will be working together as a team to bring more games, players, and events to the Central Valley and Reno areas.
See you all at ConQuest in 2013.
Noch Weiter!
Bob
Posted by Faust23 at 8:24 AM No comments: