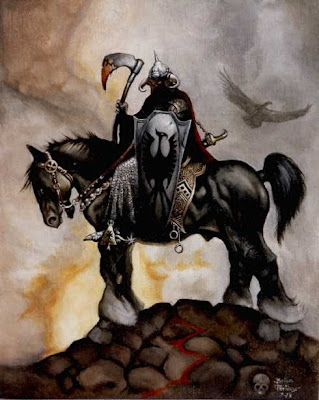 Well, we've had a few weeks of street time with Brink of Battle's release on Lulu.com. Now that many of you have rulebooks, a few consistent questions are coming in.

I'm going to have an updated Frequently Asked Questions (FAQ) to post in our Other Adventures Forum Official Thread on the Lead Adventure Forum.

Since there are no pre-packaged Profiles for your models in this game, many of you have requested a tutorial on how to go about purchasing the Ratings, Traits, and Gear that makes up your model's Profile, and then doing that for the whole Force.

It is a bit different from what most gamers are used to, and that is really the whole point. : ) So this tutorial will help you see a Force built from scratch.

You may notice the hulking badass in the picture above. That's Gath of Baal, also known as the Death Dealer created by Frank Frazetta. And yes, its a nod to the current development of Epic Heroes, our first supplement for Brink of Battle that will allow players to add a Fantasy filter to their BoB games. It will allow you to build your own group driven Fantasy background, or use a few of our own that will be detailed in the book. You will also be able to add Magic and Monsters to the non-Medieval settings like Weird Wild West or Weird War 2!

In a few weeks I'll be posting some Inborn Traits that you can play test with. Inborn Traits are what some would call Racial Abilities. They allow you to build models that are more than Human.