Shock and Awe! Bob's posting some pics of miniatures on his miniatures blog!  That's been long overdue.

Seriously though, now that the kids are sleeping through the night, we've had more evening time freed up and I've been able to go down to the basement and work on my Melnibonean figures from Citadel back in 1987.

I've been quietly buying them off of eBay for the better part of the last 8 years.  And I hadn't really had a better purpose for them until recently when I decided that they would be my next force for Epic Heroes play.

I always liked the back stories of the Harlequins and the Legion of the Damned from Warhammer 40K. Mysterious warriors traveling through the Warp and arriving in time to turn the tide of battle, but for reasons known only to themselves.  This concept was at the heart of The Bone Devils.

In the Epic Heroes Fantasy supplement for Brink of Battle, we have the ready made setting of The Lost Empires of Arkantis! (Cue thunderous drums and horns) In that cosmology there are 3 primary Planes of existence: The Ascendant, Primeval, and Diabolic Realms encompass the Positive Energy Plane, Prime Material Plane, and Negative Energy Plane concepts common to Fantasy games/worlds.

The Etherium was created when I got the idea for the Ghost Watch, a secret order of warriors who patrol the non-corporeal space between the Planes and who stand guard against beings from the Etherium such as ghosts, wraiths, and other malevolent phantasms that manifest in the real world, or that try to invade the Ascendant Plane.

I wanted a group who was more like the Dark Eldar Kabals, Legion of the Damned, and Harlequins who entered from some pocket dimension they inhabit and who hunt and kill Demons/Diabolicans. Hence the Bone Devils were born. They patrol the Netherium which is the nether realm between the Diabolic and Primeval Planes. Since they hunt diabolicans and other demonic nasties who enter the Primeval Realm I wanted them to be adorned in demonic looking masks with either a rictus theme or something similar and in all cases sporting horns. The Horned Devil from D&D was an inspiration for that theme.

However, over the centuries members of this order have become accustomed to torturing and killing diabolic entities and their mortal followers. In addition, they have become isolated from the rest of the populated lands, and see themselves as separate from other mortals. Their agendas and interventions in the affairs of the inhabitants of Arkantis have shown a compunction toward torture and slaughter which has resulted in them becoming a possible threat to those they once protected.

Ok, so enough back story. Here's some Work In Progress pics I've taken of the group so far. They are lead by an Agonarch, or overseer of tortures, battles, and reveries.  I'm holding off on naming any of them until I get further along on the painting.

The Agonarch on his mighty steed. 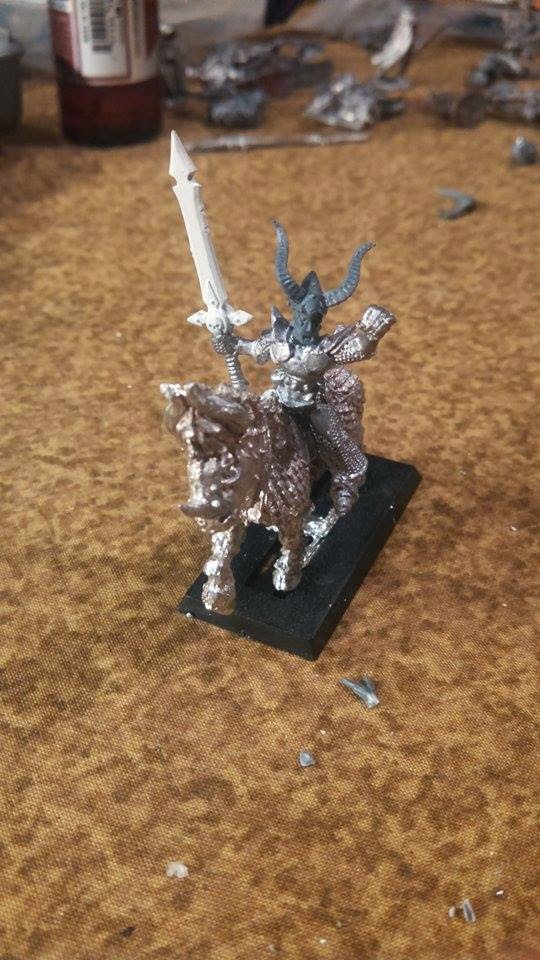 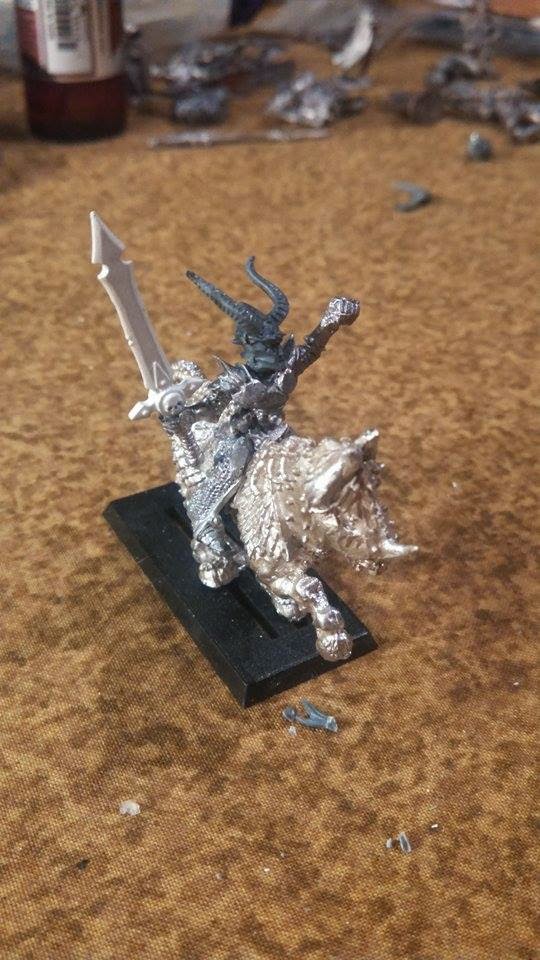 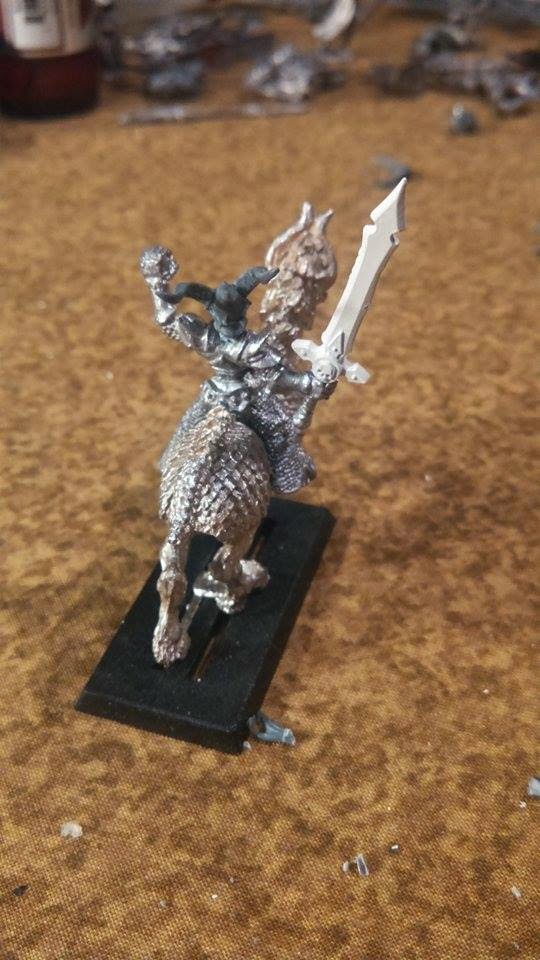 Might name these heavy knights Grim Knights. Jury is still out on that one. 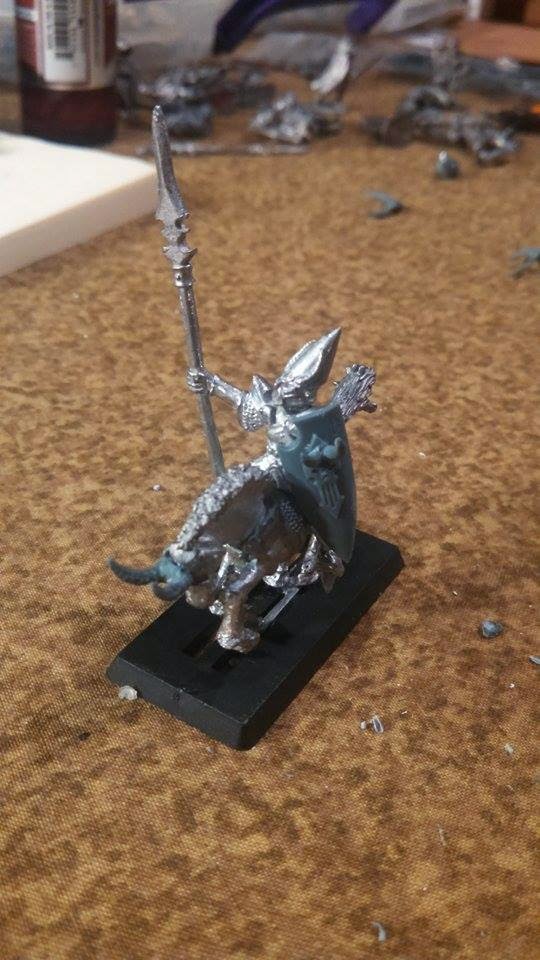 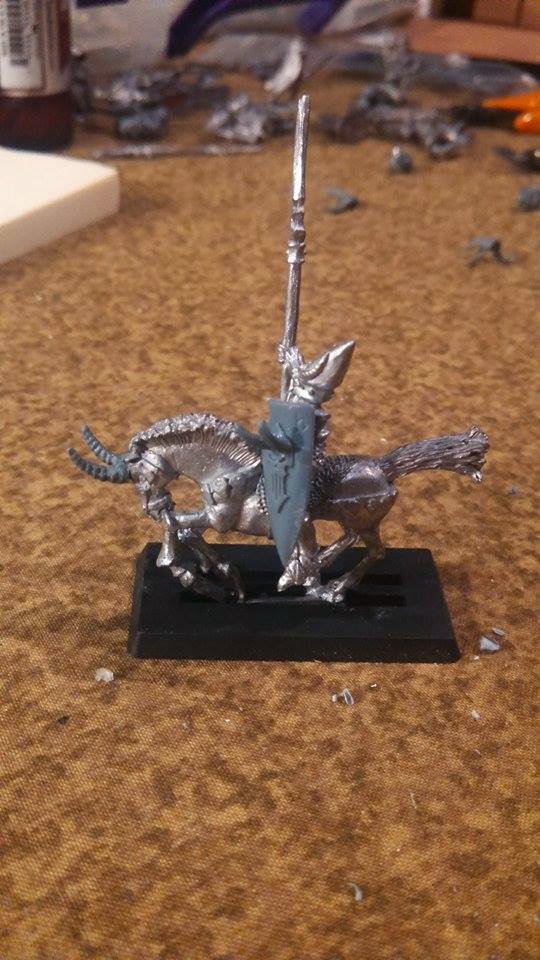 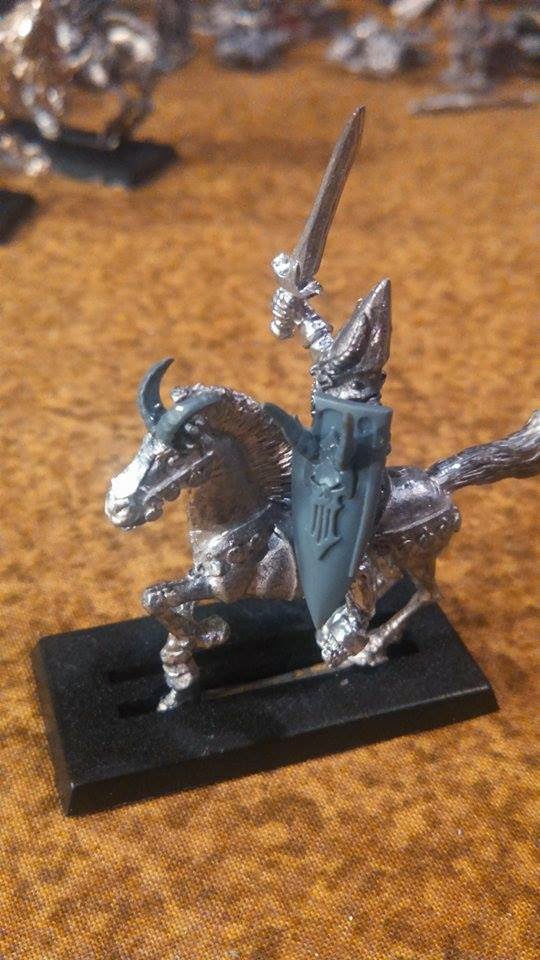 Lighter horsemen with bows are Corsairs. They use the Tunneler Trait to deploy later in the game as they open an extradimensional gateway to enter the game. Its my twist on the Tunneler Trait concept. Instead of digging through the earth to pop up later, they enter from the Netherium! 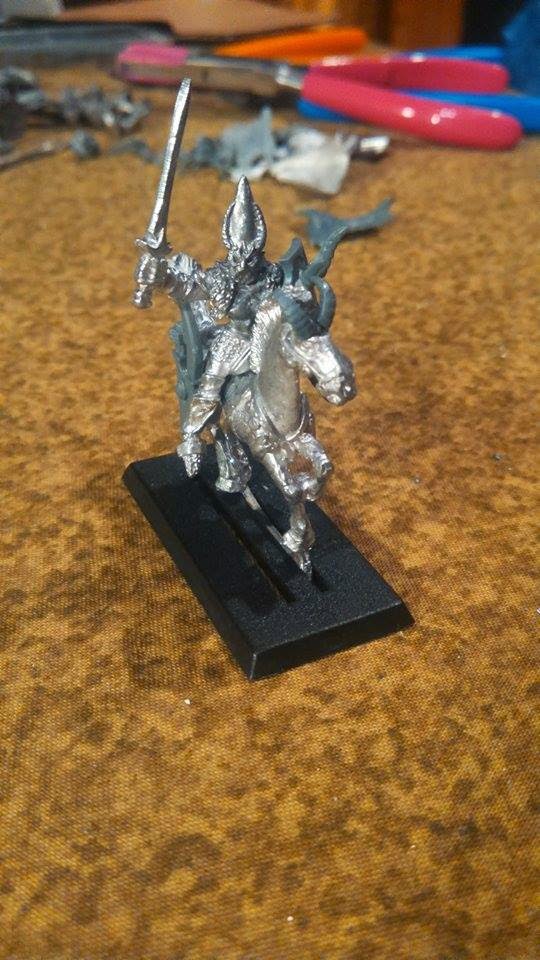 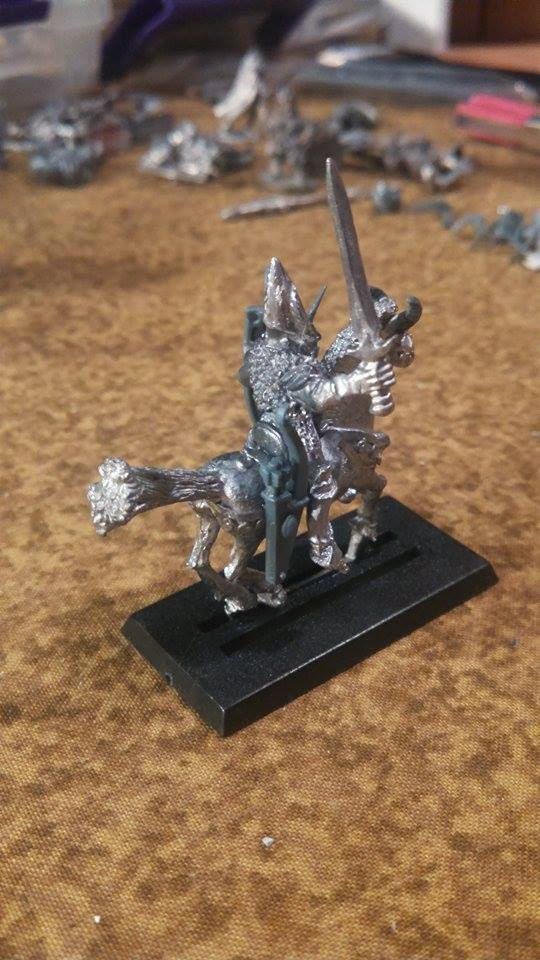 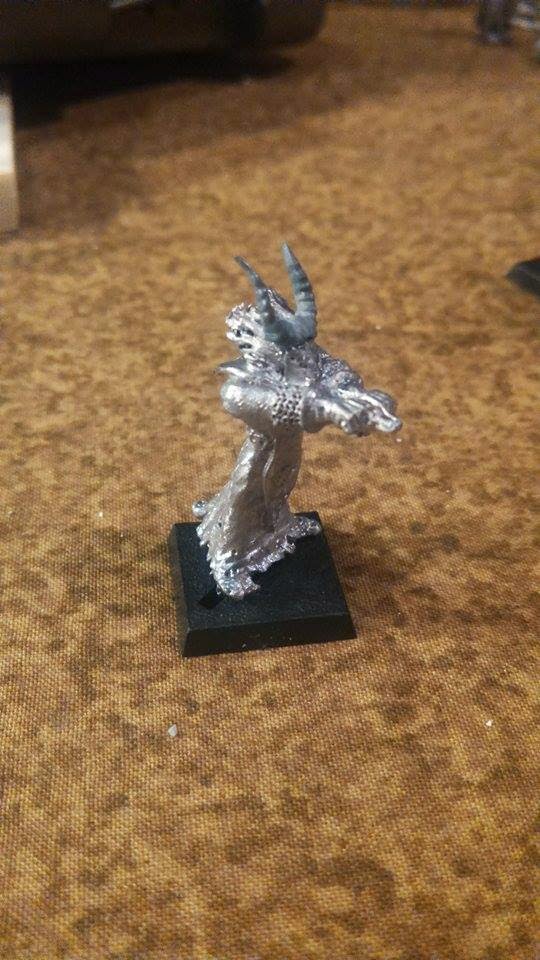 I built a Star Skiff out of some jewelry pieces I found at Hobby Lobby and some bits and bobs from my hobby gear.  I can use it as an Exotic Cavalry piece for lower Power Level games that don't allow for Flyers, or as a magical conveyance for Power Level 3 where Flight is allowed. 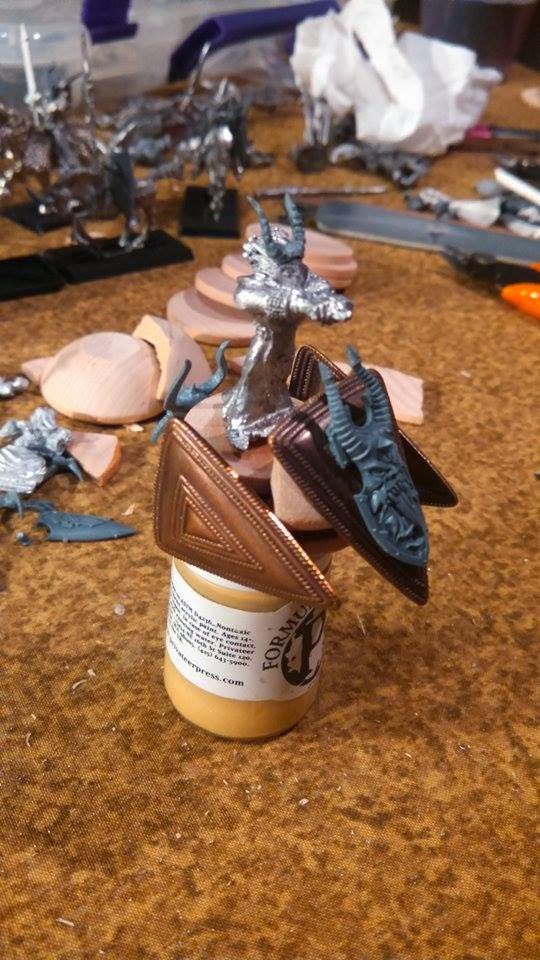 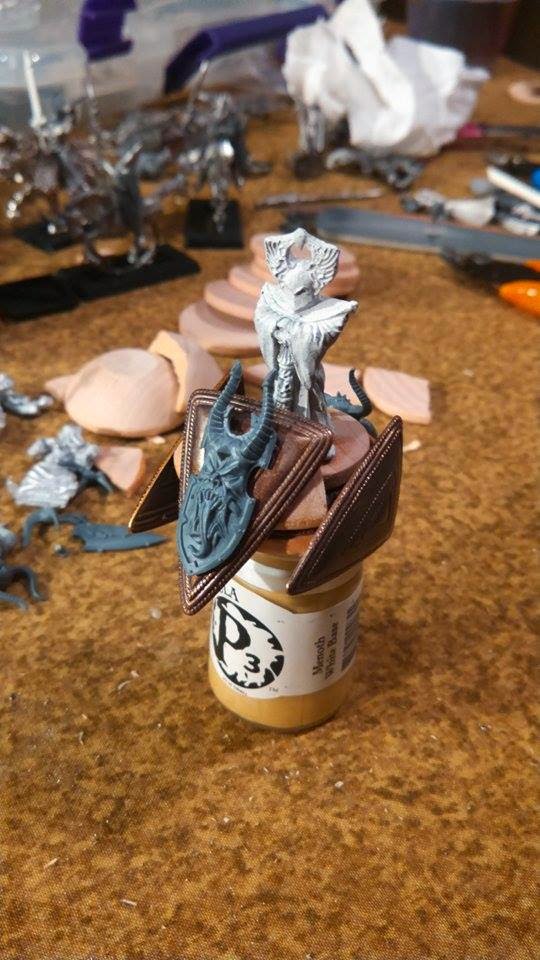 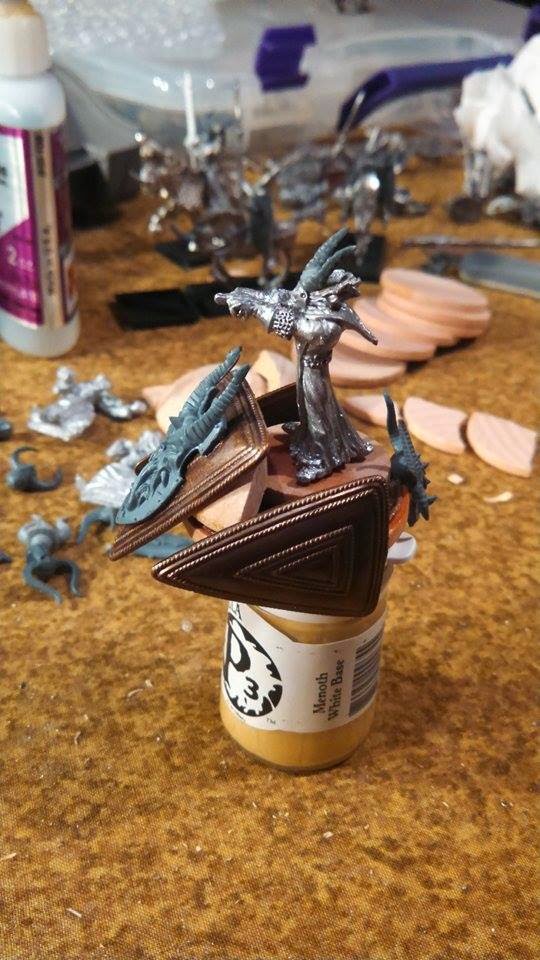 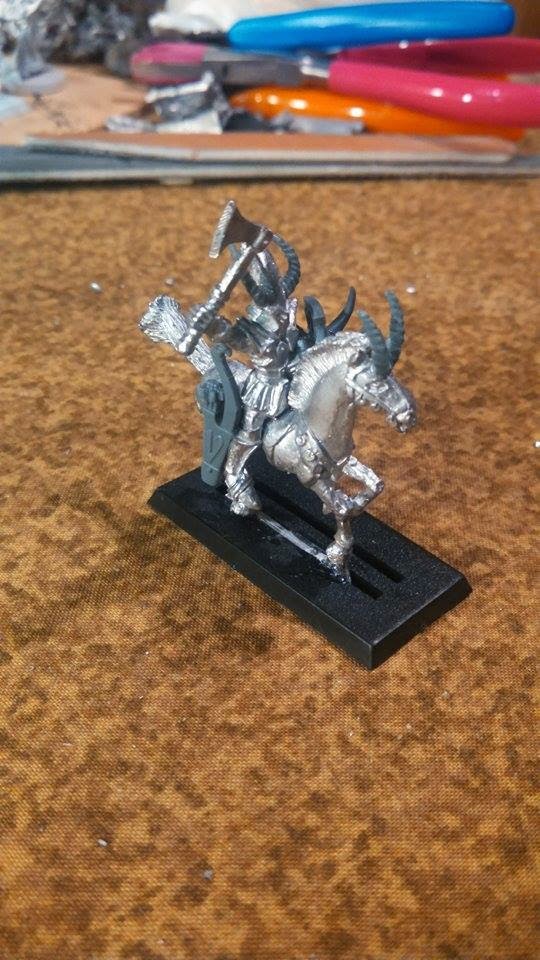 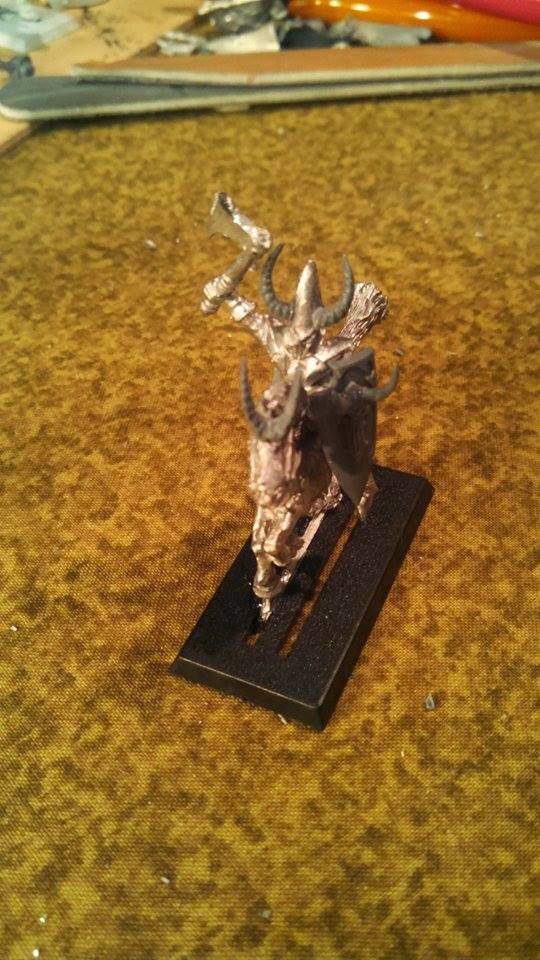 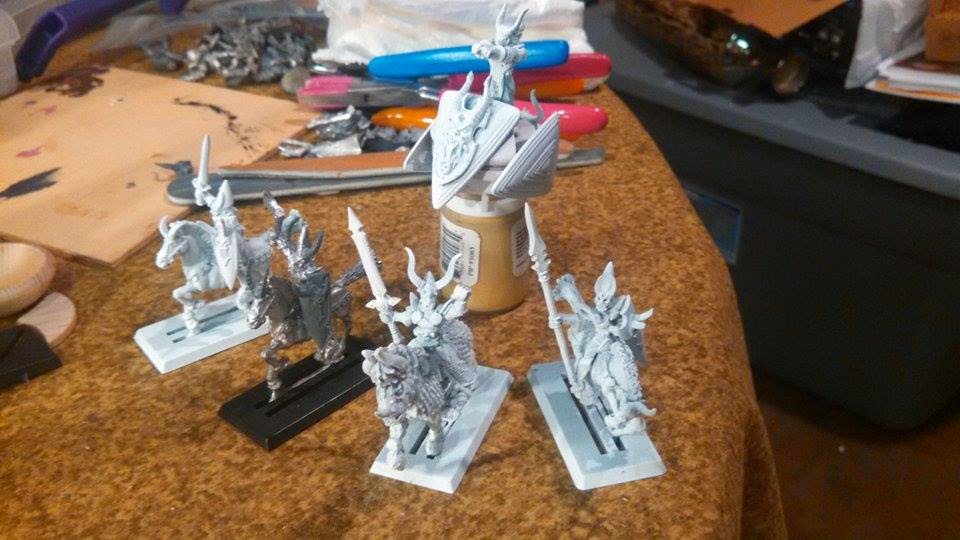 More pics later. I am done with assembly for the Agonarch, 3 Grim Knights, and 3 Corsairs, plus the Star Skiff and 2 Arcanists. Might whip up another Star Skiff just for kicks.
Posted by Faust23 at 11:46 AM No comments: